Earthbender, Protector of The Avatar, Champion of the White Lotus Alliance, Supreme Master of Vigil's Keep

Fow Bang Chow though young, is already built better than most grown men. weighing in at 195lbs. and standing 5’10’’ Fow is naturally able to vanquish his enemies. Coupled with his creative Earthbending skills, hidden shackles to bind his foes, and his Crystalline Greatsword, called Valorun, crafted by Avatar Zeng Ku himself, Fow is a force to be reckoned with.

Fow wears a golden belt with a special insignia; a circle with the symbols of the natural Elements with the earth sign at its peak. His skin is tanned from the long seasons working in the fields and a long Fu Man Chu hangs gracefully from his muscular jaw. Wearing vibrant shades of green and brown of his garb and leather bracers belie the true power this Earthbender is capable of.

Fow Bang Chow is a warrior of humble beginnings. Growing up on a rice patty farm and being the youngest in a family of 10, Fow had plenty of time to dream of lives far more rewarding than the one he had then in Yunnan Village. When Fow developed his inborn abilities in his adolescence, most of his time then on was spent honing his art. Fow saw this as a path for a better future and left his home with his father’s consent, as the town was under the control of the Imperial Order who taught that only firebenders were allowed to hone their bending art. Fow never took stalk in the teachings of the Order, and little did he know that the Order would turn out to be a tyrannical empire, set to enslave the other bending cultures and unite the world under their corrupt and dictatorial banner. Fow’s first major accomplishment as a bender was in a mixed-art bending tournament he entered when he was only 18 years old at Gaoling City. Though slightly headstrong, and nearly falling to the only non-bender in the tournament, he was still deemed the champion. This confirmed his aspirations of becoming a bender of great renown. While adventuring with some of the very same members of that competition a year later, they find themselves in the entourage of the world’s most important person.. The Avatar. After seeing what it truly means to become a battle-hardened warrior, getting his first taste of blood fighting with Jaraiya; Fow adopted a much more down-to-earth outlook and nominated himself protector of the Avatar. Arming himself to the teeth, he wont let anything stand between him and defending Avatar Jaraiya. Solidifying his plans to ensure the Avatar’s Protection, Fow Bang Chow conceives a plan to start an eclectic group who’s task is to protect the balance of the natural world, as a result The Avatar being protected as well. The Keepers of Equity will cover as a high-profile mercenary group called The Diamond Tigers for funding. When truly they operate on the inside, maintaining the balance of kingdoms and tribes alike, ensuring the symbol of the natural world and the sanctity of the Avatar’s existence. While posing as puppets they are the ones truly pulling the strings. 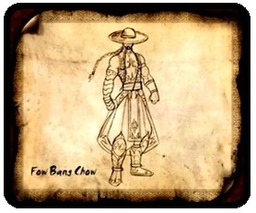